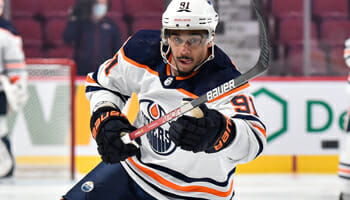 Edmonton were beaten 6-4 by Ottawa earlier this month but have really hit form since that defeat and are now fancied to gain revenge.

The Oilers hadn’t played for 10 days due to Covid issues but are healthy again and hoping to make a push for the play-offs from here on.

Let’s go with 2.2 for an away win and over 5.5 goals to kick off our Ottawa Senators vs Edmonton Oilers predictions.

Admittedly, Ottawa have continued to play with plenty of spirit since their success at Rogers Place and are on a solid 4-2-3 stretch.

As well as also beating Calgary, Columbus and Buffalo, the Senators took Washington and Carolina to overtime.

Even Saturday’s 2-1 home loss to in-form Anaheim was a brave effort, with Ducks goalie John Gibson forced to make a season-high 44 saves.

“Their goalie put a clinic on,” said coach DJ Smith. “We had 45 shots and plenty of good looks, so he’s the difference.”

“All we can do is focus on the guys we have and play games,” commented Thomas Chabot. “Everybody has got to adjust to the new situation.”

The Sens will play with energy and enthusiasm again, but we like NHL odds.

Edmonton are on a four-match winning streak and put in their best performance for some time when romping to a 7-2 success at Montreal on Saturday.

Recent signing Evander Kane opened the scoring on his debut for the Oilers just two days after agreeing to a one-year contract.

“It was great to get back out there,” he declared. “When you get on the ice, you kind of put everything else to bed – and hopefully that continues.”

Zach Hyman had two goals and an assist, prolific marksman Leon Draisaitl netted twice and Edmonton really do look to have great strength in depth at the moment.

“It’s not fun to play against when you have a new set of guys who are just as dangerous going out every shift.”

Edmonton are the kind of free-flowing outfit unfazed by playing in empty stadiums and 18.0 for a 4-2 away win completes our NHL predictions.