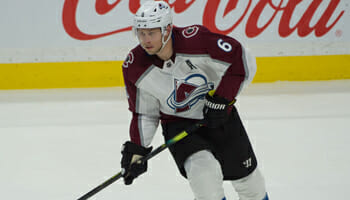 Winnipeg have been put to the sword by Colorado twice already this season and look to be meeting them at the wrong time again here.

The Avalanche head to Canada on a four-match winning streak, while the Jets have seen their play-off hopes dented by three straight defeats.

We reckon it is hard to oppose the visitors and 1.83 for an away win in regular time kicks off our Winnipeg Jets vs Colorado Avalanche predictions.

Winnipeg made a run at a wildcard spot with a 9-3-0 stretch last month but that bandwagon has since stalled.

The Jets were beaten 7-3 at Toronto before losing 3-2 to Los Angeles and 3-1 versus Detroit on home ice.

Nikolaj Ehlers is hoping for a response, stating: “That’s the nice thing about playing in this league, you get to bounce back right away.

“You play pretty much every other day against great teams.

“Colorado is obviously not doing too bad right now, they have a pretty good team in there. It’s going to be a challenge for us.”

Winnipeg were beaten 6-3 in their last meeting with the Avalanche in Colorado in February but can take some heart from having gone 3-0 up that day.

Looking at the 2.1 for them to open the scoring again.

Colorado have cemented their position as Stanley Cup favourites with a 9-1-1 hot streak and will be confident of claiming a fifth consecutive victory.

They followed up triumphs over Calgary and San Jose with back-to-back wins against Pittsburgh, beating the Penguins 6-4 on the road on Tuesday.

Nathan MacKinnon netted twice as the Avalanche became the first team to rack up 50 wins this season.

“We have a talented group, right? High expectations,” said coach Jared Bednar. “It’s hard not to like the season we’ve had to this point.

“I really like what I’m seeing. I feel like we’re still improving at this point of the year and that’s what we want to do right to the bitter end.”

Let’s finish off our NHL predictions by sticking with Colorado to oblige by exactly two goals again at 6.75.