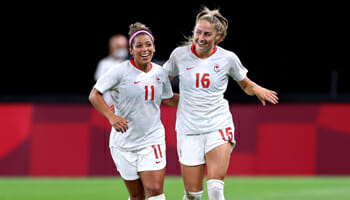 USA have all the pedigree but Canada are fancied to be competitive in their women’s Olympics semi-final on current form at this tournament.

Both teams had to go all the way to penalties at the last-eight stage and we feel this tie is destined to be another close encounter.

Punters can get 13/5 for a draw at the end of normal time and that is tempting enough to be our first USA women vs Canada women prediction.

A Look At USA’s Betting Odds

USA are favourites on their past record, having struck gold in four of the six previous stagings.

However, they failed to pick up a medal in Rio five years ago and have been far from convincing in Tokyo.

The Stars and Stripes received an early wake-up call when hammered 3-0 by Sweden in their opening Group G contest.

A 6-1 rout of New Zealand put them back on track but some wasteful finishing led to a goalless stalemate versus Australia.

Friday’s 2-2 quarter-final draw with Netherlands was an entertaining encounter and USA showed their class in the shoot-out.

However, big names such as Megan Rapinoe, Becky Sauerbrunn, Alex Morgan and Tobin Heath are all advancing in age and that has shown at times.

Looking at the 11/10 for the scores to be level at half-time is a solid selection.

Canada were bronze medalists in London and Rio, so it is no major surprise to see them competing in the latter stages again.

Coached by England’s Bev Priestman, they kicked off with a 1-1 draw against hosts Japan, leading from the sixth minute until a late leveller.

Manchester City’s Janine Becki hit a double as Chile were beaten 2-1 and Canada were a touch unlucky not to also edge out Great Britain.

Adriana Leon of West Ham put them ahead in the second half and it took a wicked deflection to help Team GB equalise with five minutes left to play.

In the quarter-finals, Brazil were shaded 4-3 on penalties following a 0-0 stalemate, with Canada recovering from missing their first spot-kick.

The Canucks have suffered four straight defeats versus USA but only a 79th-minute Rosemary Lavelle goal separated them in February’s SheBelieves Cup in Florida.

On this occasion, we’re finishing off our USA women vs Canada women betting tips by taking 13/2 for a 1-1 draw in regulation play.