Aberdeen return to action for the first time since falling foul of coronavirus protocols and face a tricky trip to St Johnstone on Thursday.

Saints have made a solid start to the new Scottish Premiership campaign, picking up four points from three away fixtures and only losing to Rangers.

We think 8/5 for a home win here is the way to go with our opening St Johnstone vs Aberdeen prediction.

St Johnstone followed up a decent 1-1 draw at Dundee United and a 3-0 defeat at Ibrox by winning 2-1 on the road at Kilmarnock on Saturday.

Saints went behind on the hour mark but then capitalised on Ross Millen’s red card to score through David Wotherspoon and Michael O’Halloran.

Head coach Callum Davidson said: “This will give us something to build on, definitely.

“I think three away games, really hard away games to start the season, is pretty tough.

“But in every game we’ve played there has been a lot of pleasing aspects of how we have performed.”

Saints were a little slow to get going at Rugby Park, though, so St Johnstone vs Aberdeen odds.

Aberdeen have had to endure an enforced rest since their opening 1-0 loss to Rangers on home turf and may be a touch undercooked compared to their next opponents.

Eight players who breached guidelines learned last week that they are set to face further SFA sanctions, having already been fined by the club.

Derek McInnes has also been hit by another injury blow, with Leeds forward Ryan Edmondson ruled out for several months.

He was brought in on loan just before the start of the season after Sam Cosgrove suffered a setback, while fellow striker Curtis Main missed the Rangers match.

That all means McInnes has a big job on his hands to rebuild match fitness and morale among his squad.

Saints did well against the Dons last term, following up two 1-1 draws with a 1-0 win at Pittodrie, and look a percentage pick to prevail.

Let’s finish off our St Johnstone vs Aberdeen betting tips by taking 13/4 for a home victory and under 2.5 goals in the game. 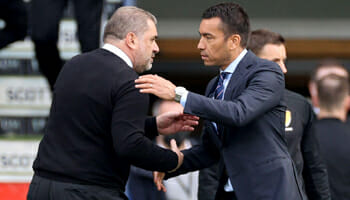