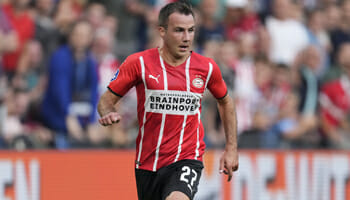 PSV continued their impressive start to the new season when crushing Midtjylland 3-0 in Holland in the first leg of this Champions League qualifier.

Roger Schmidt’s side are playing with great confidence, so they look worth sticking with in the return fixture in Denmark.

We’re happy to take Evens for an away win as our opening Midtjylland vs PSV prediction.

A Look At Midtjylland’s Betting Odds

Midtjylland were comprehensively outplayed in Eindhoven but will hope to at least be more competitive on home turf.

The Danes beat Celtic 2-1 in extra-time at MCH Arena after a 1-1 draw at Parkhead in the previous round.

Friday’s 4-1 triumph over Vejle BK at this venue made it three straight wins on the domestic front and this is a decent team to watch.

They did well to reach the group stage, even drawing 1-1 at home to Liverpool and away to Atalanta, while Ajax only prevailed 2-1 here.

Looking at the 12/5 for an away win and both teams to score.

PSV hit the front on 19 minutes in the first encounter when England Under-21s starlet Noni Madueke curled in a cracking effort from the edge of the box.

There was a hint of good fortune about the second when Mario Gotze neatly brought down a long ball and his snapshot was deflected into the top of the net.

It was 3-0 just after the half-an-hour mark when Cody Gakpo tapped in at the end of a superb counter attack.

Madueke went close twice more after the break, Eran Zahavi should have scored when put through one-on-one with the keeper and Gotze had a close-range shot well saved in the closing stages.

Saturday brought another huge boost, as Ajax were thrashed 4-0 in the Johan Cruyff Shield, with Madueke bagging a brace before Yorbe Vertessen and Gotze struck late on.

PSV had earlier routed Galatasaray 5-1 at Philips Stadion in this competition and then prevailed 2-1 in the second leg in Turkey.

Let’s finish off our Midtjylland vs PSV tips by taking 8/1 for another 2-1 success in Denmark.