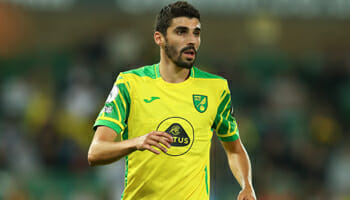 Norwich are yet to record a Premier League victory and will be looking to get off the mark in this crunch clash with Leeds.

In fact, this is an opportunity for both teams to pick up some vital points, with the pair languishing towards the bottom of the table.

It could be a nervy afternoon at Carrow Road between two of the division’s lowest-scoring sides.

It is difficult to be a Norwich supporter at present, with the Canaries shackled to the bottom of the standings with only two points to show from their opening nine games.

A chastening 7-0 defeat at Chelsea last weekend was their heaviest defeat so far and has those in East Anglia worrying they may struggle to better Derby County’s record-low points haul of 11 from 2007-08.

Scoring goals has also been a problem and the Canaries have found the target only twice.

Both of those have come from the boot of Teemu Pukki, but he has been starved of any notable service in recent weeks and could struggle to match the 11 he notched up when last seen in the top flight.

City have failed to get on the scoresheet in their last three and it is Norwich vs Leeds odds.

Second-season syndrome has well and truly taken hold at Elland Road and Leeds are hovering perilously just above the drop zone, having won just once so far this term.

They relied on a last-gasp Rodrigo equaliser from the penalty spot to secure a point against Wolves last weekend and results are going to have to pick up soon if they are to avoid a season-long relegation battle.

Marcelo Bielsa’s side have missed Kalvin Phillips, who has struggled for full fitness this term, while they have also been hit with injuries to their back line and last season’s top scorer Patrick Bamford.

A 2-0 EFL Cup loss to Arsenal in midweek could prove a blessing in disguise as now the Whites can concentrate on boosting their survival hopes.

Goals have been few and far between for these two of late, though, so we’ll go for at least one team not to score at 11/10 to complete our Norwich vs Leeds betting tips.