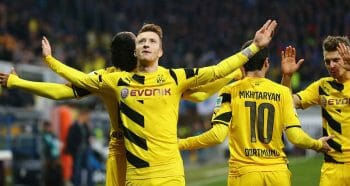 Plenty of Arsenal fans have been expecting Borussia Dortmund’s Marco Reus to rock up at the Emirates for some time, with the attacking-midfielder heavily linked to the Gunners while helping himself to 30 goals and 22 assists in 62 Bundesliga appearances over 2012/13 and 2013/14 combined.

Having missed eight matches during the second half of Dortmund’s 2013/14 campaign due to various fitness issues, ligament damage did for his hopes of sharing in Die Mannschaft’s World Cup glory, and the 27-year-old has missed a troubling tally of 60 his club’s fixtures since.

Reus’ latest stint in the treatment room began all the way back in May – just after his side’s DFB-Pokal final loss to Bayern Munich – and while the 29-cap Germany man’s continued absence was confirmed ahead of this weekend’s ‘Klassiker’ against the champions, he is due back soon.

Tomas Tuchel and co benefitted to the tune of 17 goals and five assists during the mere 36 Bundesliga and Europa League appearances the local boy managed to make the pitch for last term, so it would be unsurprising if another run of fitness and form brought admirers circling once more.

Seeing the Gunners linked makes sense considering both Ozil and Sanchez are playing hardball over new deals, with each aware that the likes of Paris Saint-Germain, Chelsea and the Manchester clubs always trump Arsenal in the wages stakes.

The Mirror believes Sanchez is demanding his £130,000 per week salary be raised to £200,000, with a buyout clause inserted into the contract, as Juventus and Manchester City reportedly watch developments closely.

Arsenal are 21/10 to beat Manchester United at Old Trafford, with Borussia Dortmund 12/5 at home to Bayern Munich.