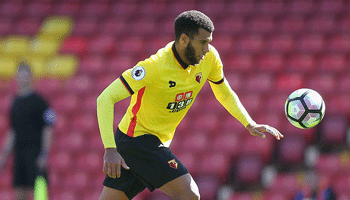 Watford and Middlesbrough are both floating just above the dreaded drop zone but have the chance to move up the table by picking up three precious Premier League points on the back of comfortable FA Cup victories.

The head-to-head record certainly favours the Hornets, who haven’t lost any of their last six league encounters with Boro and have prevailed in four of their last five meetings at Vicarage Road.

Trueform tips: Apart from Middlesbrough’s 3-0 defeat of Swansea, these two teams are pretty evenly matched on recent performances and it would not be a surprise to see both managers settle for a point after picking up just one each over the festive period.

Watford haven’t had the easiest of schedules of late but a haul of just one point from five Premier League fixtures since edging out Everton 3-2 here on December 10 has seen the Hornets slip into the wrong half of the table.

Their overall home form still makes reasonable reading, with four wins and two draws, but confidence will hardly be high after they were taken apart by Tottenham here and had to rely on a Troy Deeney penalty to pull level with Crystal Palace following a dismal display in the opening period that day.

Deeney has had a field day against Boro, netting in four straight meetings at Vicarage Road, but his faltering form this term epitomises Watford’s current woes and 21/10 they are held to a stalemate looks well worth a wager.

While Watford have only scored twice in their last five league games, Middlesbrough have been struggling in that department all season, netting a division-low 17 goals in 20 games as Aitor Karanka relies on putting out teams which are tough to break down.

Grant Leadbitter almost gave them a shock win at Manchester United before two late goals for the Red Devils turned things around but drawing a blank against Leicester, Burnley, Liverpool and Southampton since mid-December highlights the lack of a cutting edge.

Odds of 7/5 for 0-0 at half-time will appeal to form students as that has been the interval score in Boro’s last four matches and it is 13/4 for it be a draw at the break and full-time.

Team news: Watford have been hit with several problems in midfield, with Nordin Amrabat (ankle) and Roberto Pereyra (knee) struggling and Adlene Guedioura off to the African Nations Cup. Boro defender Daniel Ayala is suspended after being sent off in the FA Cup.