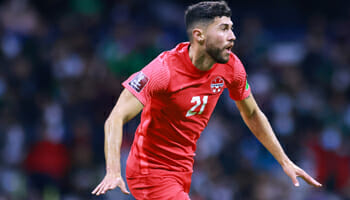 Canada only need a point to qualify for the World Cup finals when hosting Jamaica but will be keen to celebrate in style in front of their own fans.

These teams drew 0-0 in Kingston back in October but the Reggae Boyz have generally struggled when visiting the better CONCACAF teams.

We’re snapping up 1.9 for the hosts to lead at half-time and full-time in our opening Canada vs Jamaica prediction.

Canada missed the chance to confirm their trip to Qatar 2022 when edged out 1-0 in Costa Rica on Thursday but can’t be faulted for effort.

Les Rouges had Mark-Anthony Kaye sent off on 34 minutes and fell behind to a Celso Borges header in first-half stoppage time.

John Herdman’s side pushed hard for an equaliser after the break but Keylor Navas saved from Richie Laryea before Tajon Buchanan and Jonathan David were denied by the woodwork.

“We could have stayed there till 2am or 3am and not scored,” lamented Herdman. “I think the football gods were not going to give us what we need.

“But maybe it’s in the stars; qualifying at home – and it’s given us the extra motivation to finish the job off.”

Since starting out with a draw versus Honduras, Canada have rattled off five straight home wins, with USA and Mexico among their victims.

Looking at the Canada vs Jamaica odds, we reckon 4.0 for a home win by any two-goal margin is a good way to go.

Jamaica are second from bottom in the table after claiming only one win from 12 qualifiers – and that was against basement dwellers Honduras.

The Reggae Boys lost to Mexico, Panama and Costa Rica during the last international break.

Aston Villa’s Leon Bailey and Ravel Morrison of Derby had other chances for Jamaica in an entertaining encounter.

However, they are set to face far more focused opponents in Toronto and are expected to be outworked throughout.

Let’s finish off our Canada vs Jamaica betting tips by taking 3.2 for the Reds to lead 1-0 at half-time.