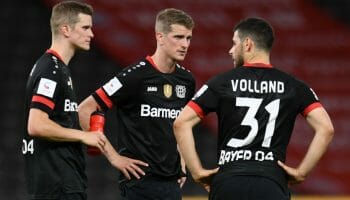 Bayer Leverkusen only have to make a short trip to Dusseldorf for Monday’s Europa League quarter-final clash and are a value bet to edge out Inter Milan.

The Nerazzurri showed signs of fatigue after a long, hard season when getting the better of Getafe and the fear is this may prove one match too many.

We’re going with 7/5 for the German outfit to progress for our first Inter Milan vs Bayer Leverkusen prediction.

Former Manchester United striker Romelu Lukaku combined his physical presence with a clinical finish to put Inter ahead against Getafe on 33 minutes.

Getafe missed a golden opportunity to equalise when Jorge Molina dragged a second-half penalty wide and ex-Tottenham midfielder Christian Eriksen made them pay late on.

That 2-0 triumph saw us land a trio of successful selections on the match, including a 25/4 correct score pay-out!

Antonio Conte told the UEFA website: “Getafe started very well and created some chances but we slowly took control of the game and I think the victory was fully deserved.

“Playing games like this in Europe is a great experience for us in order to grow as a team.

“It was a positive night and I’m very happy for the team because I can see that they are eager to continue this adventure and not go on their holidays.”

Lukaku and Lautaro Martinez are a well-balanced front pair, while having Eriksen and Alexis Sanchez to bring on highlights good strength in depth.

However, the Nerazzurri had to battle through a busy end to the Serie A season and looked heavy-legged at times versus Getafe.

Looking at the 13/5 for the German side to prevail in normal time is a tempting option.

Leverkusen made relatively light work of Rangers over two legs, following up March’s 3-1 victory at Ibrox with a 1-0 home win.

Bayer showed they mean business by fielding £70million-rated Chelsea target Kai Havertz in the second leg and dominated possession thanks to some slick passing.

Havertz hit the bar and had another couple of decent chances before Moussa Diaby eventually broke the deadlock after being put through by Charles Aranguiz.

Captain Lars Bender commented: “We had the chances to score one or two more times and in the rounds to come we have to make sure that we’re more clinical in front of goal.

“But the most important thing was getting the ball rolling, avoiding injuries and re-establishing rhythm.”

That was an encouraging effort from a team which had been out of action for over a month since beaten 4-2 by Bayern Munich in the German Cup final.

Peter Bosz had previously led his side to home and away wins over Porto, progressing 5-2 on aggregate, and this is an outfit which always looks threatening going forward.

Let’s add 23/2 for the Bundesliga outfit to prevail 2-1 to our Inter Milan vs Bayer Leverkusen betting tips.