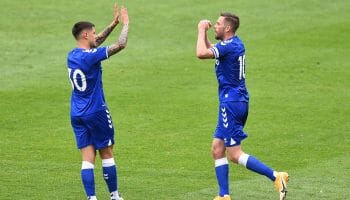 Everton will hope a smart summer in the transfer market sees them challenging for silverware this season and they begin their EFL Cup campaign with the visit of League Two side Salford.

The Toffees enjoyed an impressive start to the new campaign at the weekend with a 1-0 victory at Tottenham and look to have recruited well under Carlo Ancelotti.

The Italian is likely to make sweeping changes to his starting line-up but they should still have the quality to win both halves at 13/10 as our opening Everton vs Salford prediction.

Everton ended last season in poor form but there is a feelgood factor around Goodison Park after Ancelotti was backed in the transfer market.

All three of his signings – Allan, Abdoulaye Doucoure and James Rodriguez – impressed in the win against Spurs that could have been far more handsome.

It would be a surprise if any of those start against Salford but Ancelotti has plenty of options to call upon.

Theo Walcott and Bernard were unused substitutes at the weekend so will hope to feature, while Gylfi Sigurdsson and Tom Davies could be in midfield after coming off the bench in north London and Moise Kean is likely to lead the attack.

Everton will be keen to put the result beyond doubt as soon as possible and had a much stronger first-half record than they did in the second last season.

Salford are the big spenders in League Two and it would be a surprise if they are not in contention for automatic promotion in their second season in the EFL.

They are second favourites at 6/1 in the outright betting after a summer in which they invested heavily, bringing in the likes of former Preston captain Tom Clarke and prolific Rochdale striker Ian Henderson.

Their squad is packed with talent considering the level they are playing at and manager Graham Alexander has a good reputation, but causing an upset at Goodison Park looks a tall order.

They beat Rotherham on penalties in the first round and were held to a 2-2 draw at home by Exeter on Saturday, despite taking a second-minute lead through Henderson.

The Ammies were beaten 3-0 by Leeds in last season’s competition and a 3-0 win for the hosts at 6/1 is our final Everton vs Salford prediction.