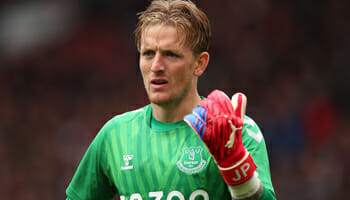 Everton have quietly made a fine start to the new Premier League season and will be confident of seeing off Burnley at Goodison Park.

The Clarets took four points off the Toffees last term but have been slower to find top gear after another summer of transfer inactivity.

Sean Dyche’s side will always scrap away but 13/5 for a home win by any one-goal margin is our first Everton vs Burnley prediction.

Everton came from behind to beat Southampton 3-1, were the better team in a 2-2 draw at Leeds and then burst Brighton’s bubble with a 2-0 victory at Amex Stadium.

Demarai Gray fired the Toffees into the lead against in-form Albion and Dominic Calvert-Lewin’s third goal in as many games sent the Merseysiders into the top four.

Richarlison threw a strop when denied the chance to take the penalty Calvert-Lewin converted but Rafael Benitez refused to criticise that feisty attitude.

“Richarlison wants to score goals, it’s normal,” said the manager. “I’m very happy with him and hopefully the next time we have two penalties, he can take the second one.”

Everton did well to fend off interest from PSG for the Brazil forward, who looks full of energy despite featuring in finals at Copa America and the Olympics.

Looking at the 13/5 for Richarlison to score in a home victory.

Burnley have little to show for three battling displays, losing to Brighton and Liverpool before a 1-1 home draw with Leeds.

Chris Wood put the Clarets ahead against his former club on 61 minutes but Patrick Bamford levelled late on.

Dyche received a welcome boost with the capture of Ivory Coast international Maxwel Cornet for a reported £12.9million.

The 24-year-old, who scored for Lyon in their 3-1 upset of Manchester City in the 2020 Champions League quarter-finals, may need time to adjust, though.

“We will see what he can bring,” commented Dyche. “The first thing is for him to settle in to the area, get used to the team and the club.

“We will see that when he gets here and gets used to what we do and first of all we will fitness test him and see where he is at with that.

“Then we’ll see how ready he is on a positional level and then we will look at the varying positions he can play and work out the best position we think he can be effective in for us.”

The Clarets are always hard to break down but things just seem to be going against them at the moment.

Let’s finish off our Everton vs Burnley betting tips by taking 7/2 for Draw HT/Everton FT.