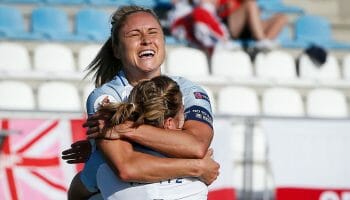 England will be desperate to avoid another slow start to a major tournament when they face Scotland in their opening match at the Women’s European Championship.

The Three Lionesses are firm favourites at 3/10 for victory in Utrecht but they have struggled in opening games over the last decade, both in the Euros and at the World Cup.

They will be relieved to get any kind of win on the board in their opener so the first of our England Women vs Scotland Women betting tips is for England to win 1-0, 2-0 or 3-0 at 27/20.

England have not won a first group fixture at a major tournament since edging out Finland 3-2 at the Etihad Stadium at Euro 2005.

Captain Steph Houghton said: “For us the important thing is we start on the front foot and no matter if it was Scotland, Spain or Portugal it would be important for us to get something from that first game.

“That’s something we’ve lacked in previous tournaments and it’s something we’ll be striving for, to start with a winning mentality and find a way to win to make sure we build the confidence and belief going into the next few games.”

England are clearly keen to come racing out of the blocks and we’re backing Mark Sampson’s team to be leading at half-time and full-time at 39/50.

Scotland have been handed a tough start to their first appearance at a major finals and they are also missing key players in Holland.

They suffered a hefty blow when their world-class midfielder Kim Little was ruled out, followed just before the squad announcement by Manchester City defender Jen Beattie.

Much will depend on Jane Ross to provide the firepower but the last of our England Women vs Scotland Women predictions is for England to win to nil at 9/10.