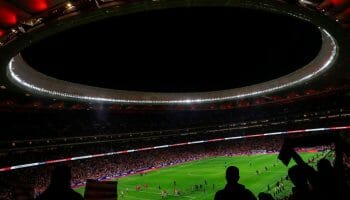 Chelsea start the second leg of their Champions League clash with Atletico Madrid with a 1-0 lead and are fancied to build on that advantage.

The Blues troubled their opponents on the break in Spain and should have more counter-attack chances here with Los Colchoneros needing to chase a win.

We’re taking 6/5 for a home victory at Stamford Bridge for our initial Chelsea vs Atletico Madrid prediction.

Olivier Giroud’s spectacular overhead kick proved the decisive moment in a predictably tight tussle at the National Arena in Bucharest three weeks ago.

It took the intervention of VAR to show that the Frenchman was not offside, but he eventually got the green light to claim a sixth goal in this season’s competition.

Giroud said: “We know the importance of the away goal in European cups, that is why I was very pleased to help the team to win this game.

“We managed the game well and we were confident, but we faced obviously a great team and we were very, very committed.

“We knew their main strengths and I think we dealt with that. Now we just need to stay focused and finish the job at home.”

Chelsea have since extended their unbeaten start under Thomas Tuchel to 12 matches with some more solid Premier League displays.

Wins over Liverpool and Everton came in between draws against Manchester United and Leeds, with no goals conceded in any of those matches.

Atletico are leading La Liga this term and have a strong European pedigree, so it would be foolish to rule out a comeback in London.

However, they put in a very subdued performance in Romania, failing to get a single shot on target, as the Blues comfortably kept Luis Suarez quiet.

“Both sides worked really hard,” commented Diego Simeone. “There were really few opportunities to score and they took theirs.

“But apart from that, it was really even. We were solid defensively, we were good in transition, we had the odd chance.”

Atleti showed last season they can come to England and get a result, beating Liverpool 3-2 after extra time at Anfield.

The feeling this term, though, is that chasing a first La Liga title triumph since 2014 has become the number one priority.

Saturday’s goalless stalemate at Getafe gave Barcelona and Real Madrid encouragement they can still challenge, so the domestic stakes are rising.

We reckon the plan here will be to keep it cagey early on and then try to shade the second period.

However, such tactics could make 17/4 for Draw HT/Chelsea FT worth adding to our Chelsea vs Atletico Madrid betting tips.