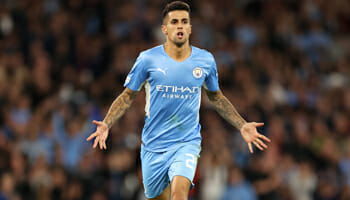 It has been a bad week for Manchester City and Club Brugge could well feel the backlash in Wednesday’s Champions League clash.

The Blues will be determined to bounce back from bowing out of the EFL Cup and suffering a shock Premier League loss to Crystal Palace.

We’re going with Evens for a home win by more than two clear goals for our first Man City vs Club Brugge prediction.

City can be forgiven the rare instance of back-to-back reversals under Pep Guardiola.

They had 25 attempts on goal before being edged out on penalties by West Ham in a cup they have won for four straight years.

“Obviously, we made mistakes that cost us the three points, but the team was there, we dominated the game,” insisted defender Ruben Dias.

“The spirit of the team was strong and I think that is the biggest positive.

“Our reaction is that we have another game in three days and we are already thinking about it.

“You bounce back, as always. Keep looking forward, keep doing what you do, keep improving – that is our mentality and that is the only way to do it.”

In this competition, City have beaten RB Leipzig 6-3 and crushed Brugge 5-1 in Belgium, either side of a 2-0 loss away to PSG.

Riyad Mahrez has scored three goals in those wins and Man City vs Club Brugge odds.

Brugge will have been dreaming of a surprise place in the knockout rounds after drawing 1-1 with PSG and then prevailing 2-1 in Leipzig.

Belgium international Hans Vanaken was on target in both of those matches and grabbed a consolation versus City at Jan Breydel Stadium.

However, Philippe Clement’s side had no answer to City’s pace, slick movement and precise passing in front of their own fans.

Joao Cancelo is another player to have scored in both of his side’s European victories this term and also struck against Olympiakos last season in this competition.

The attack-minded full-back with a sweet right foot should be able to get forward here, so let’s add 23/4 for a 3-0 scoreline catches the eye.