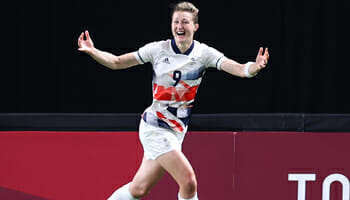 Great Britain’s women have already done us a couple of favours at the Olympics and can wrap up top spot in their group by edging out Canada.

Hege Riise’s well-drilled side have been rock-solid in securing two clean-sheet victories and may again be just too strong for their next opponents.

We’re taking 19/20 for Team GB to maintain a 100 per cent record for our first Canada vs Great Britain prediction.

Canada still have a chance to progress as pool winners after picking up four points from their matches so far.

Captain Christine Sinclair gave them an early lead versus Japan but Mana Iwabuchi levelled things up late on.

Manchester City forward Janine Beckie then bagged a brace in a 2-1 defeat of Chile, who tried to rally after Karen Araya’s 57th-minute penalty.

Bev Priestman’s side are looking to continue a proud tradition in this tournament, with Canada having finished third in London and Rio.

However, we just feel Team GB have the physical power to take control as the game progresses.

We landed a 4/1 correct score pay-out when Great Britain opened up with a 2-0 triumph over Chile, thanks to a double from Ellen White.

The prolific Manchester City striker then headed in on 74 minutes to earn her side a 1-0 victory over Japan, which gave us two more successful selections.

Riise admitted the match against Japan was a game of two halves but was delighted to recover from a slightly sluggish start.

She said: “In the first half, we didn’t look like ourselves, we didn’t have the speed of play we wanted.

“We came out as a different team with an attitude and togetherness and we all committed to the last 45 minutes.

“In the second half, we changed formation a little bit and controlled it much better.

“We are all happy, it puts us in a good position and we’re able to rest players and recover well.

“The connections between the players will get better and better each game.”

This could be a cagey contest early on but Team GB have the weapons to wear down slightly inferior foes.

Punters can get 6/4 for Riise’s side to score more goals in the second half than the first and that completes our Canada vs Great Britain betting tips.