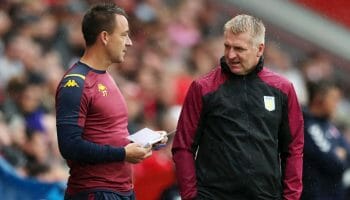 Burton pulled off an EFL Cup shock over Aston Villa on their way to the semi-finals in 2018/19 and will fancy their chances of a repeat on Tuesday night.

Jake Buxton was part of the playing squad back then and now aims to take down Dean Smith’s side as a manager.

We like 13/10 for the scores to be level at half-time as our opening Burton vs Aston Villa prediction.

Burton will have fond memories of their 1-0 home win over Villa in the second round two years ago.

The Brewers went on to beat Burnley, Nottingham Forest and Middlesbrough before running into Manchester City in the semi-finals, losing 10-0 on aggregate to the holders.

They then knocked out Bournemouth last season but were eliminated by Leicester in the fourth round.

Burton required penalties to see off Accrington at the first hurdle and began their League One campaign with a 2-1 loss at Fleetwood on Saturday.

Skipper John Brayford told the club website: “We know from playing Villa in the past, it took us far in the competition and we know a good cup run can build momentum in the league, it really can.

“It’s not one of these competitions where people think it doesn’t make any difference, every game people are playing for their shirt at the end of the day.

“It’s another game we will go into in high spirits as we know we played well in patches against Fleetwood, but we know we need to do better at other things which I’m sure we’ll work on.”

All three of Burton’s matches this season have seen each team find the net, with 11 goals being scored in total.

Looking at the 11/5 to our betting tips.

Instead, they faced Manchester United in a friendly at Villa Park and produced a 1-0 win courtesy of a goal from new summer signing Ollie Watkins.

Smith was reunited with Watkins – having worked together at Brentford – after splashing out a reported club-record £28million in a deal which could potentially rise to £33million.

Watkins netted 26 goals to fire Brentford to the Championship play-off final last season only to lose to Fulham at Wembley.

He told Villa TV: “I’m delighted, it’s a massive club. Dean sold it to me, really. I’m definitely excited to get back working with Dean, I’m really looking forward to it.

“I’m looking forward to working with him and Rich (O’Kelly), they gave me a lot of confidence playing under them at Brentford. Hopefully they can do that again now.

“It’s been a long time coming but I’m buzzing it’s done now, I can’t wait to get going. I cannot wait to wear the famous claret and blue in the Premier League. I want to do something special here and score some goals.”

Watkins could well feature at Burton but we feel it may take the Premier League side some time to gain control of this cup tie.

With that in mind, Draw HT/Villa FT at 13/4 is our final Burton vs Aston Villa prediction.