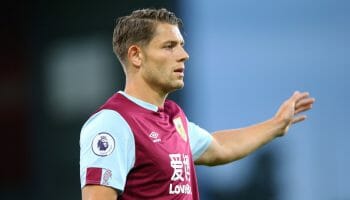 Burnley and Brighton occupied the two places above the relegation zone last season and will be keen to get off to a fast start when they meet at Turf Moor on the opening weekend.

The Clarets only picked up two points from their first seven matches last season but recovered to finish just two points below 16th-placed Brighton.

There looks little to choose between them so we’re backing a draw at 2/1 as our opening Burnley vs Brighton prediction.

Burnley’s slow start last season left them in danger of relegation but the poor form of the bottom three meant their final haul of 39 points was easily enough for survival.

That is not always the case, though, and boss Sean Dyche will be keen to make a winning start before a tough run of fixtures against Liverpool, Leeds, Everton, Arsenal and Leicester.

The arrival of new American owners has not led to much transfer activity, though, with Stoke defender Nathan Collins signed for around £12million and keeper Wayne Hennessey brought in to provide competition for Nick Pope.

Burnley are, as usual, one of the teams tipped to struggle if any of the promoted clubs can do enough to stay up and they are 11/5 in the Premier League relegation odds.

They ended last season in poor form, losing their last three matches by an aggregate score of 8-0, as well as losing seven of their last nine games.

Dyche is the longest-serving manager in the Premier League so Burnley will hope that stability proves important but only relegated duo Fulham and Sheffield United scored fewer goals last season.

Looking at the 27/20 for a goalless first half.

Burnley will be without injured pair Dale Stephens and Kevin Long. Nick Pope and Phil Bardsley are fit again after knee and hernia operations respectively.

Brighton were the draw specialists of the Premier League last season after sharing the points in 14 matches.

Two of those were against Burnley as a goalless stalemate at Brighton in November was followed by a 1-1 draw at Turf Moor in February, when Lewis Dunk’s 36th-minute opener for the Seagulls was cancelled out by Johann Berg Gudmundsson early in the second half.

Five of the eight head-to-head meetings since Brighton were promoted to the Premier League have been drawn, as had the three before that, which backs up our view that these are two well-matched teams.

Albion have lost highly-rated defender Ben White to Arsenal for £50m, while Davy Propper has switched to Dutch side PSV.

Zambia midfielder Enock Mwepu comes in from RB Salzburg for around £18m, with Kjell Scherpen of Ajax and Benfica’s Jeremy Sarmiento are other recruits.

Seagulls boss Graham Potter said of 23-year-old Mwepu: “He has a great deal of experience for somebody of his age, including Champions League and international football.

“He’s primarily a central midfielder, although he is capable of playing in numerous positions, is open-minded, adaptable and very keen to learn and develop.”

With nothing to suggest either club is set for a major upturn in fortunes, we’re backing the scores to be level at both half-time and full-time at 3/1 as our final Burnley vs Brighton prediction.