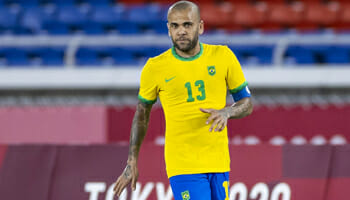 Defending Olympic champions Brazil made smooth progress through the group stage and should prove too hot for Egypt in the quarter-finals.

The underdogs have looked organised and efficient so far but lacked a cutting edge up front versus Spain and Argentina in their pool.

We’re snapping up 5/4 for the holders to win to nil as our first Brazil vs Egypt prediction.

Brazil always take this tournament seriously and were bronze medallists in Beijing and runners-up in London before striking gold in Rio.

Former Barcelona great Dani Alves is captain of the current team and provides leadership for a talented young outfit.

Star of the show so far has been Everton forward Richarlison with five goals, including a hat-trick in an opening 4-2 victory over Germany.

Ivory Coast held Andre Jardine’s side to a goalless stalemate but Richarlison’s late brace helped them to beat Saudi Arabia 3-1.

Hertha Berlin front man Matheus Cunha is another player to watch as he passed Ronaldinho’s record for most goals at Under-23 level in that closing group game.

Looking at the 19/20 for the favourites to oblige by more than one clear goal.

A Look At Egypt’s Betting Odds

The decision to build from the back paid dividend in Group C as Egypt started out with a gutsy 0-0 draw versus Spain.

A 1-0 loss to Argentina left them with work to do but beating Australia 2-0 proved sufficient to snatch second place in that section.

The obvious conclusion to take from those efforts is that Egypt will not be easy to break down once more but they may struggle to threaten at the other end.

That pushed us towards adding 6/1 for the South American side to prevail 2-0 to our Brazil vs Egypt betting tips.