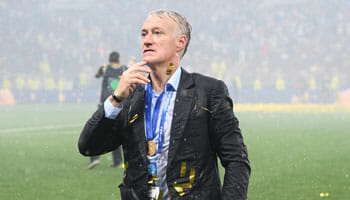 France are involved in a Nations League Group A1 relegation battle and desperately need to beat Austria in Paris to ease fears of dropping down.

Les Bleus have picked up just two points from four fixtures and are a couple behind their next opponents, so this is a must-win match.

We reckon 21/20 for a home win and over 2.5 goals is the way to go with our first France vs Austria prediction.

France have failed to fire throughout this campaign, starting out with a 2-1 loss at home to Denmark.

Les Bleus managed to secure a share of the spoils in Croatia and Austria but a 1-0 defeat by the Blazers in Paris has put them in big trouble.

For this game and Sunday’s trip to Copenhagen, Didier Deschamps has to cope with a lack of experience at the back and in midfield.

In defence, Raphael Varane has returned to top form for Manchester United, while William Saliba’s progress at Arsenal will surely have been noted.

Saliba has looked a real threat when going forward for set-pieces for the Gunners this term, scoring at Bournemouth and Brentford.

If now given a chance to shine at international level, France vs Austria odds.

Austria began their Group A1 campaign in a blaze of glory when romping to a 3-0 win in Croatia in Ralf Rangnick’s opening match as manager.

Das Team also threatened to upset France thanks to a 37th-minute strike from Bristol City forward Andreas Weimann, but Mbappe levelled late on.

Either side of that contest, Austria were beaten 2-1 at home and 2-0 away by Denmark to leave them in a precarious position.

Stalwarts such as David Alaba, Marcel Sabitzer and Marko Arnautovic can usually be relied upon to put in a good shift.

However, there is a lack of strength in depth in Rangnick’s squad, which failed to qualify for the World Cup before his arrival.

They could only manage fourth in their group behind Denmark, Scotland and Israel, before losing to Wales in the play-offs.

This is a chance for Les Bleus to get back on track and 5/1 for a home win by any three-goal margin completes our France vs Austria betting tips.