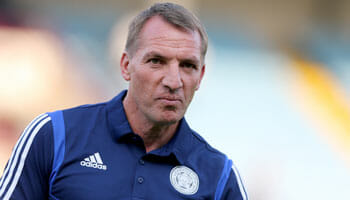 Leicester and Arsenal have recovered well from shaky starts in the Premier League this season and are level on 14 points from nine outings.

However, even though the Gunners are showing plenty of promise, we reckon the Foxes are much more like the finished article at the moment.

Punters can get 6/4 for a home win at King Power Stadium and that is our first Leicester vs Arsenal prediction.

Leicester returned from the international break with a fine 4-2 victory over Manchester United here and followed up by beating Brentford 2-1 on the road.

Youri Tielemans scored a sensational 25-yard strike against the Bees and later helped tee up James Maddison to grab the decider.

Having won away to Spartak Moscow in between, Brendan Rodgers beamed: “It was a brilliant result for us on the back of a long journey during the week.

“You know you are coming to a place that is very tough and they are a tough team to play against.

“We produced the moments of quality and showed the mental resilience. It’s a fantastic win for us.”

Tielemans continues to go from strength to strength and Maddison said he feels like he has his “swagger” back after a difficult period.

Vardy will be back in the Leicester squad, having sat out the EFL Cup win against Brighton due to a knee problem.

Ricardo Pereira and Ayoze Perez will be assessed. Pereira experienced some tightness after the game in midweek while Perez has been ill.

Arsenal are unbeaten in six top-flight fixtures after enjoying a comfortable 3-1 triumph over Aston Villa at Emirates Stadium.

The Gunners were the better side throughout, with Thomas Partey, Pierre-Emerick Aubameyang and Emile Smith Rowe netting in a thoroughly deserved victory.

“I think the man of the match could have been anybody,” beamed Mikel Arteta. “I think individually, they were all terrific.

“I think the way they played was at a high, high level.”

However, without taking anything away from Arsenal, Villa were well off the pace, especially in the first half, as they slipped to a third consecutive defeat.

The Gunners still have to prove they can perform as well on their travels, having scored only one goal from four away games in this competition.

Let’s finish off our Leicester vs Arsenal betting tips by taking 16/5 for the Foxes to oblige by any one-goal margin.

Arsenal are dealing with a sickness bug within the squad. Pablo Mari was unable to play in the EFL Cup win over Leeds having been struck down with illness and Benjamin White came off during the game with the same issue.

Granit Xhaka (knee) is out while there will be a late fitness test for Kieran Tierney (ankle).