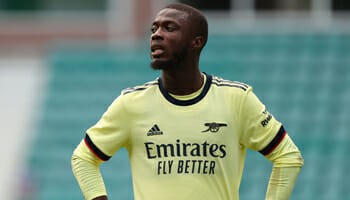 Brighton’s Premier League clash with Arsenal has the potential to be a cracker and could be the perfect way to start your Saturday evening.

Albion are just one point off top spot following a blistering start to the season, while the Gunners have turned the tide in recent weeks and couldn’t have been more impressive when embarrassing rivals Tottenham in the North London derby.

There is little to split the pair in the betting, but we will take a chance on an entertaining match with over 3.5 goals.

Neal Maupay rescued a point for Brighton with a dramatic late equaliser in their grudge match with Crystal Palace on Monday night.

The French forward’s form is one of the reasons Graham Potter’s side sit in such a lofty position in the table.

That was his fourth of the season and he is already halfway towards matching last season’s tally of eight.

This is the best start Brighton have ever made to a Premier League campaign and they face a real test of their top-half credentials as they welcome a thriving Arsenal to the south coast.

Albion’s strength in depth will also be put to the test due to a growing injury list but they have discovered the knack of finding the net this season and both teams to score appeals at 4/5 as one of our Brighton vs Arsenal betting tips.

Brighton will be without Steven Alzate after the midfielder suffered an ankle injury against Palace, while Danny Welbeck is a major doubt due to a hamstring problem.

Yves Bissouma, who missed out against Palace due to a knee issue, will be assessed but fellow midfielder Enock Mwepu (groin) and defender Adam Webster (hamstring) are out.

Ben White returns to the Amex for the first time since his £50million summer switch to the Gunners and the England international has been at the heart of Arsenal’s turnaround in fortunes recently.

Since his return to the starting line-up, they have only conceded one goal and he will be tasked with keeping his former colleagues quiet on Saturday evening.

Mikel Arteta will take plenty of heart from last season’s results against the Seagulls.

Arsenal did the double to nil, with Nicolas Pepe grabbing a brace in their most recent encounter.

The Gunners raced into a three-goal lead within half an hour against Tottenham last weekend and secured bragging rights with their most assured performance of the season.

Things are beginning to look much brighter for Arteta’s men and it would be no surprise to see them get off to another fast start here.

For our final Brighton vs Arsenal prediction, we’ll go for the Gunners to win the first half at 21/10.

Arsenal are expected to be without midfielder Granit Xhaka for up to three months because of a knee problem, although it is not expected that he will need surgery.